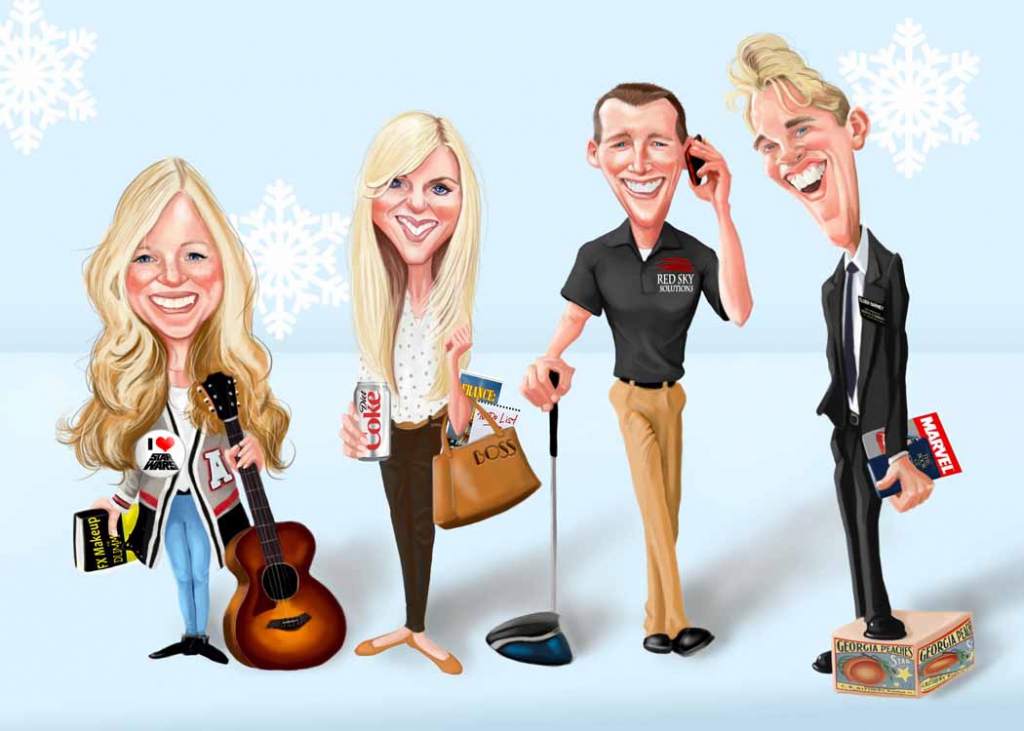 The holiday season is just around the corner!!  Make this season unique with a caricature Christmas card from Doodle Art Studios.  Customize your Christmas card this year with caricature art depicting your favorite hobbies, interests, likes, etc.  It will definitely be the card everyone will talk about and keep. Contact Doodle Art today to get your caricature Christmas card ordered before the holiday seeason is over.  The process is easy.  Once your order is requested send close up photos of those to be inlcuded on the card plus indicated there interests, hobbies, etc.  A quick sketch is created for your approval then depending on detail your card can be ready in 7 days.  The final image is a high resolution digital file which is copyright free.  Get one today!!

A little history of Hallmark Cards:

Joyce Clyde Hall became captivated by a salesman who stopped by his family’s store in 1906 in Norfolk, Nebraska. Driven by thepostcard craze of 1903, Hall decided to venture from retail of various products to wholesale of postcards. He moved his business to a larger market of Kansas City. As time went on, Hall became more convinced that greeting cards would become more prominent than postcards. Greeting cards, according to J.C. Hall, represented class, promised discretion and “they were more than a form of communication—they were a social custom.”

By 1915, the company was known as Hall Brothers and sold Valentine’s Day and Christmas cards. In 1917, Hall and his brother Rollie “invented” modern wrapping paper when they ran out of traditional colored tissue paper. In 1922, the company expanded throughout the country. The staff grew from 4 to 120 people, and the line increased from holiday cards to include everyday greeting cards.

In 1928, the company adopted the name “Hallmark”, after the hallmark symbol used by goldsmiths in London in the 14th century, and began printing the name on the back of every card. In the same year, the company became the first in the greeting card industry to advertise their product nationally. Their first advertisement appeared in Ladies’ Home Journal and was written by J.C. Hall himself.[4] In 1931, the Canadian William E. Coutts Company, Ltd., a major card maker, became an affiliate of Hall Brothers, which was Hall Brothers’ first international business venture.

In 1944, it adopted its current slogan, “When you care enough to send the very best.” It was created by C. E. Goodman, a Hallmark marketing and sales executive, and written on a 3×5 card. The card is on display at the company headquarters. In 1951, Hall sponsored a television program for NBC that gave rise to the Hallmark Hall of Fame, which has won 80 Emmy Awards.[6] Hallmark now has its own cable television channel, the Hallmark Channelwhich was established in 2001. For a period of about 15 years, Hallmark owned a stake in the Spanish language network Univision.

In 1954, the company name was changed from Hall Brothers to Hallmark. In 1958, William E. Coutts Company, Ltd., was acquired by Hallmark; until the 1990s, Hallmark’s Canadian branch was known as “Coutts Hallmark”.

In 1998, Hallmark made a number of acquisitions, including Britain-based Creative Publishing (a recent spinoff of Fine Art Developments), and U.S. based InterArt.